COME ON THE BLUES!

Godolphin had two live wires in a renewal of Deauville's G1
LARC Prix Maurice de Gheest that looked well up to standard but also tough to call and it was the white cap of the second- string Space Blues (Ire) (Dubawi {Ire}) that emerged on top in a thriller. Third in this 6 1/2-furlong feature 12 months ago, the Charlie Appleby representative had yet to win over this short a trip but gave all the right signals with the way he travelled through the seven-furlong G2 Lennox S. when registering a career-best success at the Qatar Goodwood Festival July 28. Upping his game again here, the TDN Rising Star was ridden with supreme confidence by William Buick and justified that faith with a late surge to overhaul Hello Youmzain (Fr) (Kodiac {GB}) and Lope Y Fernandez (Ire) (Lope de Vega {Ire}) in the final 50 metres. At the line, the 3/4-of-a-length margin to the former probably underestimated the superiority of the 9-2 shot, while the G1 Prix Jean Prat runner-up Lope Y Fernandez was a head away in third and Godolphin's 11-10 favourite Earthlight (Ire) (Shamardal) surrendered his unbeaten record a further short neck behind in fourth. 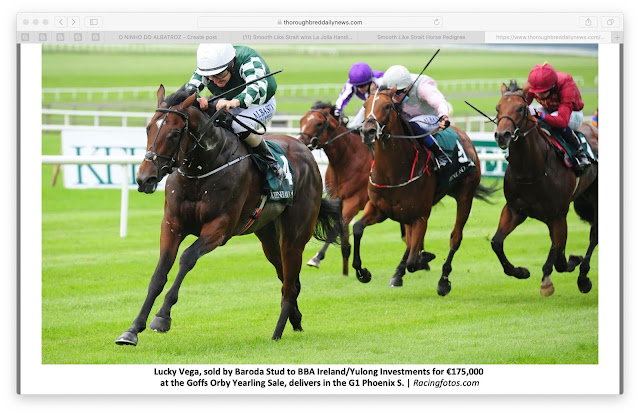 THUNDER MOON A NEW RISING STAR AT
THE CURRAGH

Sunday's seven-furlong Irish Stallion Farms EBF Maiden at The Curragh looked as if it could be storing something exciting beforehand and so it proved as Anne Marie O'Brien's Thunder Moon (Ire) (Zoffany {Ire}) exploded onto the scene to earn TDN Rising Star status. Keen early tracking the leading trio, the 10-1 shot who had won a Dundalk barrier trial July 29 travelled with supreme ease once Declan McDonogh had got a grip on him. Given the command approaching the final furlong, the homebred split rivals and surged to the front soon after and was pushed out to put 3 3/4 lengths between him and the solid yardstick Colour Sergeant (Ire) (Kingman {GB}), with Ballydoyle's Baton Rouge (Ire) (Galileo {Ire}) a length away in third. 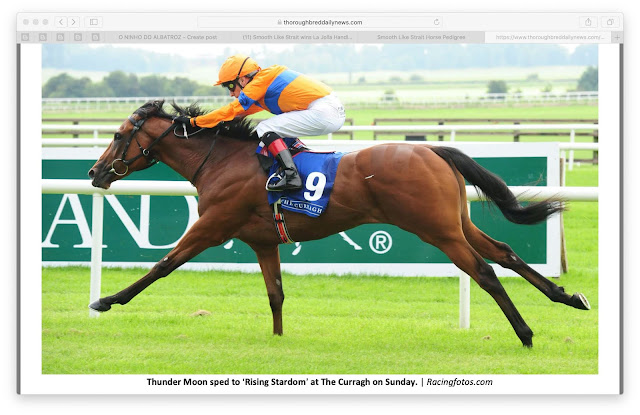 Royal Ascot Group 1 winner Palace Pier (GB) (Kingman {GB}), who is unbeaten in four starts, worked well on Saturday in advance of the Aug. 19 G1 Prix Jacques le Marois, according to trainer John Gosden. The Sheikh Hamdan bin Mohammed Al Maktoum colourbearer graduated on debut at Sandown last August and added a novice race there a month later before being shelved. Successful in a June 6 handicap at Newcastle over the all-weather, the bay saluted in the G1 St James's Palace S. at Royal Ascot in his latest outing on June 20.
Publicado por Friends of Hallandale Beach Club at 2:30:00 AM