Bryan Hilliard's homebred Second of July (Jack Milton), who was a 68-1 outsider when he captured his debut at Belmont Park last month, came back to score another upset victory in the GIII Futurity S. in Elmont Sunday. The win earned the gelding an automatic berth in the GII Breeders' Cup Juvenile Turf Sprint at Keeneland Nov. 6.

Both the dam of and weanling half-brother to unbeaten leading juvenile colt Jackie's Warrior (Maclean's Music) have been supplemented to the Keeneland November Breeding Stock Sale, it was announced Sunday--one day after the Steve Asmussen pupil further solidified himself as the favorite for the GI Breeders' Cup Juvenile with a 5 1/2-length romp in Saturday's GI Champagne S. at Belmont. Dam Unicorn Girl (A. P. Five Hundred) will be offered in foal to leading sire Into Mischief; her weanling colt is by American Pharoah. Both will be consigned by Beau Lane Bloodstock during the Book 1 session on the sale's first day, Nov. 9. 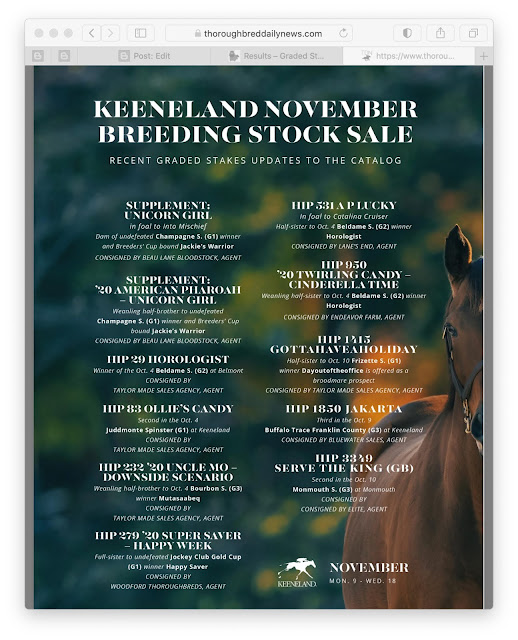