ELKTON, MD--On a bright fall morning in Maryland, Arnaud and Leigh Delacour are diligently at work at their Fair Hill-based stable. Arnaud is on the phone, talking logistics with various jockey agents while inspecting a youngster that just returned from a workout. Meanwhile, Leigh leads a troop of four exercise riders and their mounts out for a light jog through the rolling pastures of Fair Hill. When she returns, they'll compare notes and move on to the next set. It takes a special kind of relationship for a couple to successfully run a business together, but anyone that's trying should take notes from the Delacours. In just over a decade, they've taken hundreds of trips to the winner's circle and made several Grade I headlines. But if anyone asks, they will say they owe much of their success to a Frenchman and an Englishman who took the time to develop them into the horsemen they have become.

Arnaud grew up on a farm in Normandy and quickly realized his dream of one day becoming a successful trainer. He started out at Chantilly, becoming the assistant trainer to Alain de Royer Duprt. After testing the waters in France, England and Argentina, he eventually ended up in the States with fellow Frenchman Christophe Clement. 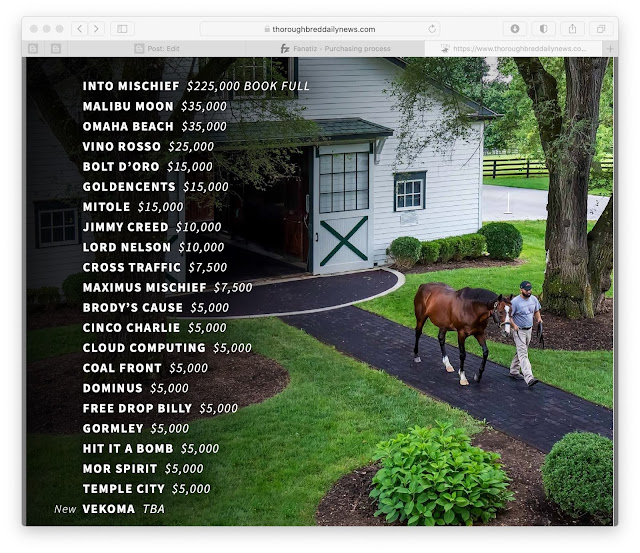 Godolphin's dual Group 1-winning juvenile Earthlight (Ire) (ShamardalBWinters Moon {Ire}, by New Approach {Ire}) has been retired from racing and will stand at Kildangan Stud in 2021.

LOVE LIKELY DONE FOR THE YEAR

This season's dual Classic-winning filly Love (Ire) (Galileo {Ire}) is likely to bypass the Breeders' Cup and is probably done for the year, trainer Aidan O'Brien said on Tuesday. Love was scratched from her last intended target, the G1 Prix de l'Arc de Triomphe, when the ground came up soft.

MGSW THREAT TO STAND IN FRANCE

MGSW Threat (Ire) (Footstepsinthesand {GB}BFlare of Firelight, by Birdstone) will stand at Haras du Mont Goubert, Jour de Galop reported on Tuesday. He will stand for €6,000,

The Richard Hannon trainee and TDN Rising Star captured the G2 Gimcrack S. and the G2 Champagne S. and was runner-up in the G2 Richmond S. and G2 Coventry S., all as a juvenile. Bred by La Lumiere Partnership and a 100,000gns Tattersalls December foal, the Cheveley Park Stud colourbearer=s record stands at 9-3- 2-0 and $328,925 in earnings.