Sam-Son Farm, whose Thoroughbred racing and breeding operation dates back to 1972 and is considered a pillar of the sport in Canada, will be dispersing its stock over the next 18 months, primarily through public auctions handled by Keeneland and Fasig-Tipton.

The liquidation of racing and breeding stock was announced via press release Oct. 28. Sam-Son executives did not cite a specific reason beyond saying in a prepared statement that:

"After serious consideration and discussion, the owners have unanimously decided to initiate an orderly dispersal and to step back from active participation in the racing and breeding world."

The fate of Sam-Son's two equine properties--a 200-acre breeding and foaling farm in Milton, Ontario and 160-acre training facility in Ocala, Florida--were not addressed in the press release. Nor was the status of the operation's employees. 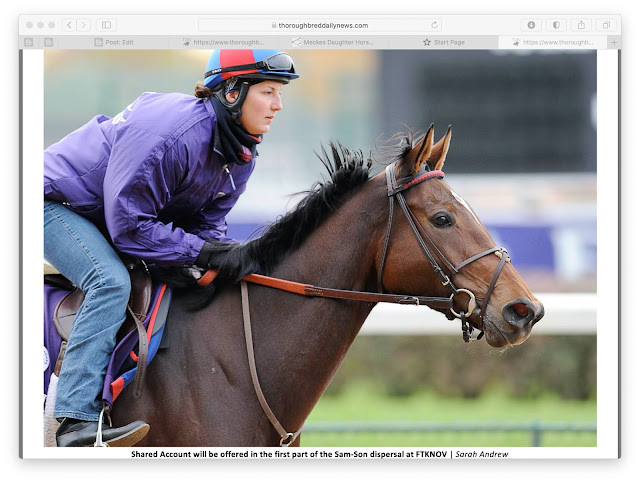 Dialed In, leading freshman sire of 2016 and a perennial leading sire of his crop ever since, is represented in 2020 by GI American Pharoah S. winner Get Her Number. Tapiture's Hopeful Growth was a four-length winner of this year's GII Monmouth Oaks and placed in the GII Black-Eyed Susan S. He is also represented by TDN Rising Star' Premier Star, winner of the Jersey Shore S. and placed in the GII Amsterdam S. A top- five first-crop sire of 2019 by earnings and second-ranked first-crop sire by winners with 27, Tapiture leads second-crop sires by winners (68) and is second in black-type winners (five) and black-type horses (12).

New to the roster, Country House earned more than
$2.1 million, and in addition to his Derby victory, finished second to eventual Classic winner War of Will in the GII Risen Star S. at Fair Grounds and was third in the GI Arkansas Derby.

Darby Dan will once again be offering various incentive programs in 2021 to provide value to breeders, including Profit Protection, Share the Upside, Black-Type Bonanza, and Goldmine 20/20 Match Program.

Five-time Grade I winner Einstein (Brz) (Spend a Buck--GayCharm {Brz}, by Ghadeer {Fr}) was euthanized at Park Equine Hospital Wednesday due to complications from cancer. He had been pensioned at Old Friends since 2019.

Trained by Helen Pitts, Einstein captured the 2009 GI Santa Anita H. and four Grade I stakes on turf. In all Einstein made 27 starts, winning 11 races. He won or placed in 13 stakes, all of which were graded, and his career earnings totaled $2,703,324.

Einstein retired from racing in 2010 to stand at Adena Springs in Kentucky. He later stood at Adena Springs North in Ontario, Canada, and at Magali Farms near Santa Ynez, CA. His top runners include Grade III winner Rankhasprivileges and multiple-stakes-placed E Equalsmcsquared.