The trainer originally best known for many high-class jumps winners that has made an eye-catching advance on Flat racing=s top contests in recent years will share her thoughts with the TDN on a monthly basis in this most unusual of seasons.

Whitsbury Manor Stud announced the stud fees for its five

"Our industry finds itself in uncertain times and it is vital that we act accordingly," said Ed Harper, Director of Whitsbury Manor Stud. AWe have therefore listened to our clients and chosen to drop the fees of our three highest priced stallions to offer the best possible value to breeders and keep the wheels turning. In any other year you could expect the sire of a champion [G1] Sussex S. winning miler such as Mohaather to increase in fee, but we feel this is the right thing to do in the circumstances. Showcasing now has five sons at stud which is phenomenal from where he started. He also enjoyed significant group race success this year with Alkumait, Bodhicitta, and Tropbeau, who we hope will all stay in training next season."

Additionally, Sergei Prokofiev (Scat Daddy--Orhcard Beach, by Tapit) will kick off his stud career at ,6,500, Oct. 1 SLF. "Being such a fast 2yo by Scat Daddy gives breeders an excellent opportunity to breed speed and precocity to their mares," said Harper. Cont. p4

Michael Tabor, Derrick Smith and Mrs. John Magnier=s Arizona (Ire) (No Nay Never--Lady Ederle, by English Channel), winner of the G2 Coventry S. in only his third career start, has been retired from racing and will stand under the Coolmore banner at Castlehyde Stud for the 2021 season. A fee for Arizona will be announced at a later date. 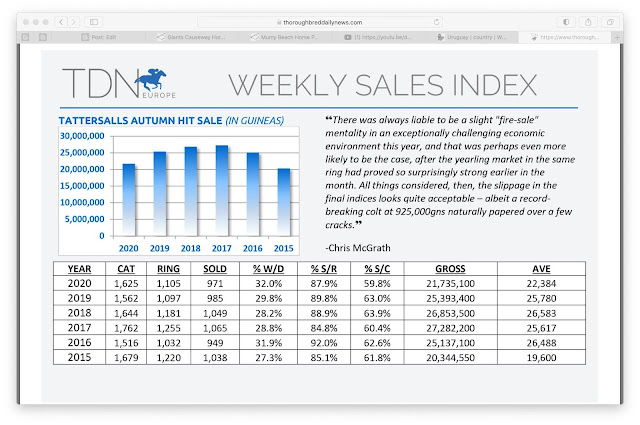 Seven-time Group 1 winner Almond Eye (Jpn) (Lord Kanaloa {Jpn}) will attempt to add another top-level score to her already impressive record in Sunday's 2,000-meter G1 Tenno Sho (Autumn) at Tokyo. Winner of the filly Triple Crown in 2018 before scoring in the G1 Japan Cup, the 5-year-old mare added a pair of Group 1 wins in 2019 in the Dubai Turf and last fall's Tenno Sho, beating Danon Premium (Jpn). A lack-luster ninth in the 2,500-meter G1 Arima Kinen in December, she made a belated start to the 2020 season following the cancellation of the Dubai World Cup Carnival in March, winning the May 17 G1 Victoria Mile over 1,600 meters. In her latest start, she finished second over slightly heavy going behind Gran Alegria (Jpn) in Tokyo's G1 Yasuda Kinen June 7.

According to trainer Sakae Kunieda, Almond Eye has had the same schedule as she did last year, getting some down time over the summer at Northern Farm Tenei in Fukushima before returning to the training center Oct. 2.