CHAMPIONS AT A DISTANCE

Still in its infancy but already firmly established as a staple of racing=s culinary experience, Ascot's Qipco British Champions Day is back on Saturday with the first of possibly several editions set in the COVID-19 era. No crowds, none of the hoopla that characteristically greets the collection of luminaries in all categories, no atmosphere other than that created by the races themselves. Back in June, the Royal meeting was the first of the country=s major festivals to take place in the current void and it came through thanks largely to an epic performance by Stradivarius (Ire) (Sea the Stars {Ire}) in the G1 Gold Cup. It is therefore a relief that he belongs to one of the most sporting of owners with a genuine sense of the importance of tradition. Thankfully, Bjorn Nielsen has opted to allow his radiant staying star the chance to kick off the action in the opening G2 QIPCO British Champions Long Distance Cup. Successful in 2018 before being inched out by Kew Gardens (Ire) (Galileo {Ire}) in a memorable encounter 12 months ago, the undeniably loveable chestnut slingshots from his shot at history in the G1 Qatar Prix de l=Arc de Triomphe 13 days ago. Seventh when bogged down in an unsuitably-run affair at ParisLongchamp, he is back in his counting house with Moyglare Stud's dual G1 Irish St Leger heroine Search For a Song (Ire) (Galileo {Ire}) the freshest challenge on his continuing odyssey. Cont. p2

URBAN BEAT HAS HIS DAY IN THE MERCURY

Admirably consistent all season, Fitzwilliam Racing=s Urban Beat (Ire) (Red Jazz) gained his reward with a narrow verdict in Friday=s G3 Al Basti Equiworld, Dubai Pat Smullen Mercury S. at Dundalk. Runner-up in three listed contests including twice to compatriot Make a Challenge (Ire) (Invincible Spirit {Ire}) this term, the 11-2 shot was in touch with the leaders early and gave typically generously for Ben Coen to gain the advantage 100 yards from the line. Pressed by the 2-year-old Muker (Ire) (Mehmas {Ire}) and My Laureate (Ire) (Rajj {Ire}), who had beaten him by four lengths in a course-and-distance conditions event a fortnight earlier, the bay fought hard to score by two neck margins. "He deserved that as hes been bang there all year in those type of races," Coen said. "He ran into a bit of traffic the last day here. I rode him a bit more positive today and he enjoyed it. He=s a horse that you can't get to the front too soon with, but he=s actually won well at the line tonight."

Urban Beat, whose sole previous black-type success came in the Listed Woodlands S. over this trip at Naas last April, is the second group winner for the syndicate after the G1 Matron S. heroine Champers Elysees (Ire) (Elzaam {Aus}). He has fluctuated only slightly from a set level of form in the two years since he captured a brace of Curragh sprint handicaps and was beaten two short-heads when third under top weight in that track's Rockingham H. on June 28 despite going down in the stalls beforehand. The dam is related to the little-known Belgian Poule d'Essai des Poulains winner and G1 Derby Belge runner-up Peginsur (GB) (Longleat).

Coolmore's Bolshoi Ballet (Ire) (Galileo {Ire}), who hit the board going one mile in his Oct. 3 debut at Newmarket last time, was sharply into stride and led from the outset of Friday's Irish Stallion Farms EBF (C&G) Maiden at Leopardstown. Holding sway throughout the one-mile test, the even-money favourite was shaken up when threatened in early straight and powered clear under continued urging inside the final furlong to prevail by an impressive four lengths from O'Reilly (Fr) (Frankel {GB}), adding TDN Rising Star status into the bargain.

"I fancied him in Newmarket, but he was too green that day," explained winning rider Seamus Heffernan. Ryan [Moore] said he liked him and that he''d be very hard to beat next time he ran. He was whinnying going to the start and, as I was going to make the running, I thought [racing with] company is a bit better. When I had company it worked and when I let him go he quickened really well. He's from a good family and he's a good mover. He has a big future." 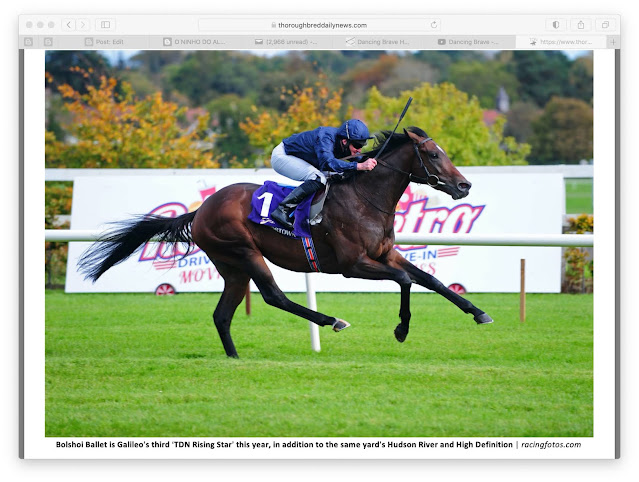