Magic Wand (Ire) (Galileo {Ire}BPrudenzia {Ire}, by Dansili {GB}), a winner of the 2019 G1 Mackinnon S., has been retired from racing and will join Coolmore Stud~s broodmare band in Ireland next year, Coolmore Australia tweeted on Thursday morning. The 5-year-old was due to defend her title in the Mackinnon S., but was withdrawn with a foot abscess prior to the race. 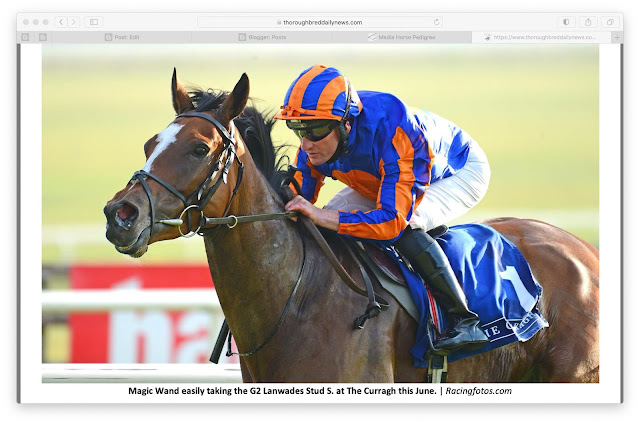 It's not a new phenomenon for a Flat stallion to switch to a National Hunt stud and suddenly find himself in strong demand and that was certainly the case this year for Maxios (GB), who moved from Gestut Fahrhof to Castlehyde Stud, where he covered 298 mares.

Weatherbys, which has just published its annual Return Of Mares, records the son of Monsun (Ger) as the busiest stallion of 2020 in Britain and Ireland, while the most in-demand freshman sire was Crystal Ocean (GB), who covered 280 mares at The Beeches Stud.

The book also shows a decline in the combined foal crops of the two countries to be 5%, falling from 13,443 in 2019 to 12,778. Weatherbys does, however, issue the caveat that foal registrations have been carried out later by some breeders owing to "the unique challenges presented by Covid", and that could lead to a higher number of foals being registered between the end of September and next February=s Return Of Mares Supplement. Cont. p3

TARNAWA ON SONG FOR BREEDERS' CUP

MG1SW Tarnawa (Ire) (Shamardal) is in good form heading toward a start in the Breeders' Cup at Keeneland on Nov. 7. The 4-year-old filly who races in the colours of His Highness The Aga Khan is cross entered in both the GI Longines Breeders' Cup Turf and the GI Maker's Mark Filly & Mare Turf. Christophe Soumillon has the ride. The chestnut has won all three starts this year beginning in the G3 Give Thanks S. at Cork on Aug. 8. She later added the Sept. 13 G1 Qatar Prix Vermeille and the Oct. 4 G1 Prix de l'Opera Longines, both at ParisLongchamp. Cont. p7

Rathasker Stud has released the 2021 covering fees for its four stallions, with all bar one having been dropped in price. Bungle Inthejungle (GB), sire of this season's G3 Cornwallis S. winner Winter Power (Ire), who has won four of her nine races in a busy juvenile campaign, will stand at i8,000, down from i12,000 in 2020.

The stud's stalwart Clodovil (Ire) was represented by a new Group 1 winner this season in the Prix Marcel Boussac heroine Tiger Tanaka (Ire) and he has had his fee reduced from i8,000 to i5,000.

Clodovil stands alongside his son Gregorian (Ire), who has also enjoyed stakes success in France this year via G2 Criterium de Maisons-Laffitte winner Plainchant (Fr), and he too will stand at i5,000, his fee having been dropped from i6,000.

Completing the quartet is Coulsty (Ire), a son of Kodiac (GB) whose first-crop runners this year have posted a strike-rate of 43%, and he remains unchanged at a fee of i4,000.

Vinery Stud has won the race to secure the breeding future of dual Group 1-winning colt Ole Kirk (Written Tycoon). Vinery immediately joins the existing ownership group of the colt and will stand the son of Written Tycoon at its Hunter Valley farm once his racetrack career is completed.