Lope de Vega (Ire) (Shamardal), who has enjoyed a stellar year with his progeny on the track, has seen his fee increased to €125,000 from €100,000 at Ballylinch Stud in Ireland. In 2020, the sire of 77 black-type winners total, has enjoyed four Group 1 winners, including juveniles Lucky Vega (Ire) in the G1 Phoenix S. and Aunt Pearl (Ire) in the GI Breeders' Cup Juvenile Fillies Turf. Previous Grade I winner Newspaperofrecord (Ire) scored in the GI Just a Game S. Stateside and Gytrash (Aus) saluted in the G1 Lightning S. Down Under. Overall, there have been 18 black-type winners by the Ballylinch resident in 2020, 12 at the group or graded level.

Freshman sire New Bay (GB) (Dubawi {Ire})'s fee has been set at €20,000. The 8-year-old is already on the black-type board with group winners New Mandate (Ire) and Saffron Beach (Ire), while two other first-crop juveniles have placed at listed level.

Arc hero Waldgeist (GB) (Galileo {Ire})'s first foals will soon be at the breeding stock sales. He covered 117 mares in his first season with 63 stakes performers or producers in the book and will stand for €17,500.

G1 Prix du Jockey Club hero Mishriff (Ire) was the star performer for Make Believe (GB) (Makfi {GB}), whose eldest foals are sophomores. Mishriff was supported by Group 3 winners Rose of Kildare (Ire) and Believe in Love (Ire), as well as a brace of additional group-placed 3-year-olds. His fee is €15,000.

Rounding out the roster is first-season sire and MG1SW Fascinating Rock (Ire) (Fastnet Rock {Aus}) at €5,000. From just 16 runners so far in 2020, he has sired three winners and it is notable he did his best running as an 4- and 5-year-old.

The five-strong Juddmonte 2021 stallion roster, led by Frankel (GB) (Galileo {Ire}) the youngest stallion to sire 40 group winners in history, was announced on Tuesday. The Juddmonte wunderkind is siring 11% group winners to runners and 15% black-type winners to runners, and he will stand for an unchanged fee of £175,000 in 2021. At the sales, his highest- priced filly brought 2 million gns, while he also had a colt knocked down for 1.1 million gns during the recent Tattersalls October Yearling Sale Book 1.

Although his oldest foals are only four, Kingman (GB) (Invincible Spirit {Ire}) has already sired two Classic winners, striking with Fearless King (GB) in the G2 German 2000 Guineas this season, one of 14 black-type winners this term. He was also represented by Group 1 milers Persian King (Ire) and Palace Pier (GB). The 9-year-old sired a trio of seven-figure yearlings, with a 2.7 million gns colt, a 1.45 million gns filly and a €1.1 million colt. His stud fee of £150,000, like Frankel's, is unchanged.

Group 1 winner Expert Eye (GB) (Acclamation {GB}), whose oldest progeny will soon go under the hammer at the foal sales is priced at £12,500. The G2 Vintage S. victor has 22 set to be offered at Tattersalls and another 10 at Goffs. 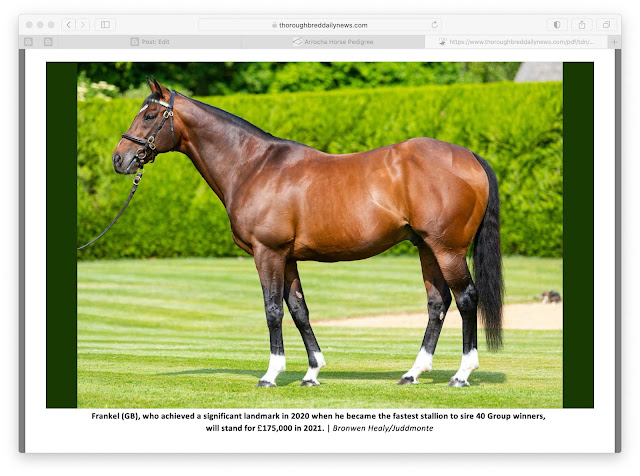 WAY TO PARIS 'A REAL COUP FOR IRISH BREEDERS'

The evergreen Way To Paris (GB) (Champs Elysees {GB}BGrey Way, by Cozzene), who has proved better than ever this year, is finally to relinquish the service of his venerable owner Paolo Ferrario on the racetrack for a fresh start at Coolagown Stud in 2021.

The popular grey, who has one last assignment in the G1 Japan Cup later this month, made a deserved Group 1 breakthrough this summer in the Grand Prix de Saint-Cloud, having failed by just a head to run down subsequent Arc winner Sottsass (Fr) (Siyouni {Fr}) in the G1 Prix Ganay on his previous start.

CHARM SPIRIT ON THE MOVE TO FRANCE

MG1SW Charm Spirit (Ire) (Invincible Spirit {Ire}) will stand at Haras du Logis Saint-Germain in France next year, Jour de Galop reported on Tuesday. Previously a resident of Tweenhills Farm and Stud, his fee will be €7,000. Also a shuttle stallion to Windsor Park Stud in New Zealand, the 9-year-old has sired nine black-type winners, seven at the group level worldwide. He joins French Fifteen (Fr) (Turtle Bowl {Ire}) at the French nursery, who will command €5,000.