With the ongoing Del Mar meet renamed a few years ago to honor Hollywood icon Bing Crosby, it seems only fitting that a colt named Spielberg (Union Rags) would take his shot in the GIII Bob Hope S., the race formerly known as the Hollywood Prevue S. The $1-millon Keeneland September graduate should jump a warm favorite for the seven-furlong affair, a race won by his trainer Bob Baffert no fewer than six times in its last nine runnings and 10 times dating back to 1996.

Runner-up on debut and in the GI Del Mar Futurity to the talented Dr Schivel (Violence), the chestnut was never truly dangerous when third in the GI American Pharoah S. at Santa Anita Sept. 20. He was more workmanlike than spectacular in graduating by a mile here 13 days ago, but is nevertheless the one they'll have to beat.

Weston (Hit It a Bomb) is the only member of the Bob Hope sextet with a graded victory to his credit, having earned a neck success in the GII Best Pal S. Aug. 8 prior to a third in the Futurity, where Spielberg was 3 ¾ lengths ahead of him.

Last Saturday at Keeneland was a banner day for the European Breeders' Cup raiders, who won all four of the races on turf. While Aidan O'Brien, who trained the first three home in the GI Breeders' Cup Mile, has enjoyed his fair share of success at the meeting over the years, there were first-time victories for Dermot Weld, James Fanshawe and Kevin Ryan.

Fanshawe's Pegasus Stables welcomed home Alison Swinburn's Filly & Mare Turf winner Audarya (Fr) (Wootton Bassett {GB}) on Thursday and, while she will soon be off on her winter holiday, she will return to training next year following a season which also included victory in the G1 Prix Jean Romanet in August. Cont. p2

Three-time Group 1-winning sprinter Advertise (GB) leads the 2021 stallion roster at the National Stud, where he will once again stand for ,25,000. The son of Showcasing, who won the G1 Phoenix S. at two and the G1 Commonwealth Cup (in race record time) and the G1 Prix Maurice de Gheest at three for trainer Martyn Meade, is out of the Pivotal (GB) mare Furbelow. He is the first six-furlong Group 1 winner at two and three to retire to stud in the UK since his grandsire Oasis Dream (GB). Advertise was supported by 67 black-type producers or performers in his first book last year including the dams of Group 1 winners Aclaim (Ire), Dick Whittington (Ire) and Maarek (GB).

The aforementioned Aclaim, the winner of the G1 Prix de la Foret and G2 Park S. also for Meade, will be available at the National Stud next year for ,9,500. The son of Acclamation (GB) from the family of Montjeu (Ire) and the G1 Irish 1000 Guineas winner Again (Ire) (Danehill Dancer {Ire}) had his first yearlings this year, and they sold for up to 145,000gns to Shadwell.

The National Stud roster is rounded out by Rajasinghe (Ire) and Flag Of Honour (Ire), who will each stand for, 3,000.

Highclere Stud has announced that its resident stallions Cable Bay (Ire) and Land Force (Ire) will stand for, 8,000 and, 5,000, respectively, in 2021, and has also unveiled new incentives for breeders alongside its regular Oct. 1 SLF terms.

Jamie Richards turned his stable's carnival fortunes around in spectacular fashion on the closing day of the New Zealand Cup meeting with five winners at Riccarton, including the biggest prize of all. 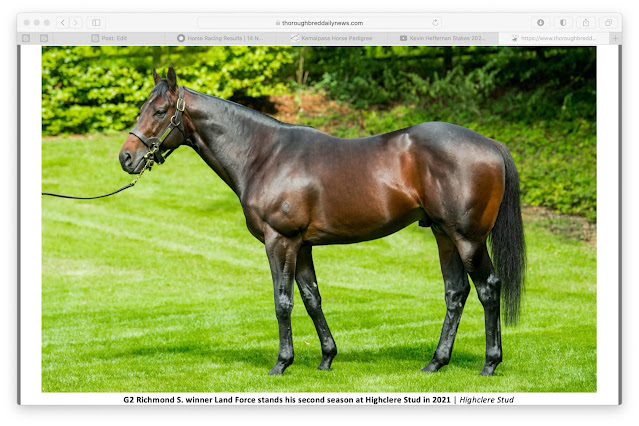