Haras d'Etreham, which recently welcomed Group 1 winners Hello Youmzain (Ire) and Persian King (GB) to its roster after the sale of Wootton Bassett to Coolmore this year, has bought into another stallion prospect in top German 3-year-old Wonderful Moon (Ger) (Sea The Moon {Ger}). Wonderful Moon will race at four under the partnership of Etreham and the horse's original owners Stall Wasserfreunde with trainer Henk Grewe. Wonderful Moon announced himself as a top-class prospect when winning last year's G3 Herzog von Ratibor-Rennen by 12 lengths. He built on that promise with wins in the G3 Cologne Classic over 1800 metres and G2 Union Rennen over 1900 metres, and was given an extended holiday after a below-par fifth as the favourite in the G1 Deutsches Derby on July 12. Wonderful Moon entered winter quarters off a four-length win in Hannover's G3 Grosser Preis der Besitzerveinigung on Oct. 25.

Bred by Sea The Moon's breeder Gestut Gorlsdorf, Wonderful Moon is a half-brother to the stakes placed Wonderful Gorl (Ger) (Aerion {Ger}) and out of a half-sister to the stakes- winning Wunder (Ger) (Adlerflug {Ger}).

Ballyhane Stud, home to five stallions, has released its fees for 2021, with newcomer Sands Of Mali (Fr) set to stand at i6,500. Established sires Dandy Man (Ire) and Elzaam (Aus) were both represented by Group 1 winners this year, and Dandy Man's fee will remain at i15,000, while Elzaam's has been set at i5,000.

ONE MASTER RETIRED TO STUD

The 6-year-old mare, trained by William Haggas for Roy and Gretchen Jackson, only got going in the late summer of her 3- year-old campaign but quickly made up for lost time, breaking her maiden at second asking before winning the Listed October S. at Ascot. She picked up a first pattern win the following August in the G3 Fairy Bridge S. at Tipperary before upsetting the Foret at 33-1, and she would never be that long a shot again.

BAHRAIN TROPHY TO BE SHOWN WORLDWIDE

Friday's ,500,000 Bahrain International Trophy will be shown in 123 countries, with Racecourse Media Group in partnership with the Rashid Equestrian and Horseracing Club having secured widespread global coverage.

Bahrain's most important race will be shown on Racing TV and Sky Sports Racing in the UK and Ireland, with ITV featuring it as part of its Saturday programme. Fox Sports in the U.S. will carry the race; ESPN in Latin America and the Caribbean (also Sportsmax), SuperSport in Africa (Tellytrack in South Africa) and Green Channel in Japan (via recording).

Seventeen Middle Eastern countries will be able to watch via the Dubai Racing Channel and Bahrain TV. Other European channels carrying it will include Sport Deutschland (Germany), SilkNet (Georgia), Equidia (France) and TV12 (Sweden). Racing.com and Sky Thoroughbred Central will show the race in Australia. 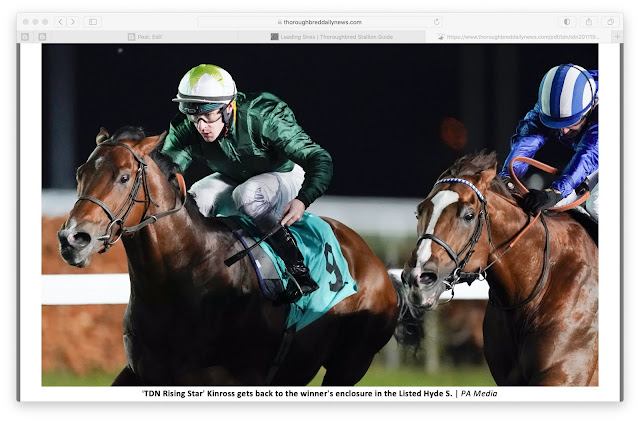