MCKINZIE'S JOURNEY FROM JUVENILE STAR TO THE GAINESWAY ROSTER

Since his maiden-breaking >TDN Rising Star=-worthy juvenile debut, McKinzie had caught the eye of Gainesway Farm.

But according to Gainesway=s Director of Stallion Sales and Recruitment Sean Tugel, the son of Street Sense had the attention of nearly every top stud farm in the country.

"He was on everybody's radar from the very beginning," he said. "Any time you see one win first time out from Bob Baffert's barn, you have to recognize it."

McKinzie's resume only improved from there over the next three years before he retired in October of this year, cementing his place on the Gainesway stallion roster.

A $170,000 Keeneland September purchase by Karl Watson, Michael Pegram and Paul Weitman, McKinzie was named in honor of Brad McKinzie, an executive at Los Alamitos and longtime friend of Baffert.

Following his maiden victory, a disqualification elevated the colt as the winner of the GI Los Alamitos Cash Call Futurity S., leaving him undefeated as a juvenile.

While he continued the winning streak in his next start in the GIII Sham S. at three, the bay was later shelved and forced off the Classic trail, but returned with a vengeance for the second half of his sophomore season in the GI Pennsylvania Derby, and later a near five-length win in the GI Malibu S. Cont. p3

FINITE BACK TO HER BEST IN CHILUKKI

Finite (Munnings), a leading contender for the GI Longines Kentucky Oaks earlier this year after capping a five-race win streak in the GII Rachel Alexandra S., returned to her best form Saturday to annex the GIII Chilukki S. over a one-turn Churchill mile that proved right up her alley. Backed as the even-money choice coming off a close second in the GII Lexus Raven Run S. at Keeneland going seven panels Oct. 17, the blaze-faced chestnut settled well off the pace early while drafting behind rivals. Asked for more after a hot half in :45.59, she circled up out wide heading for home and wore down a stubborn Sanenus (Chi) (Scat Daddy) by midstretch en route to a 2 1/2-length tally. 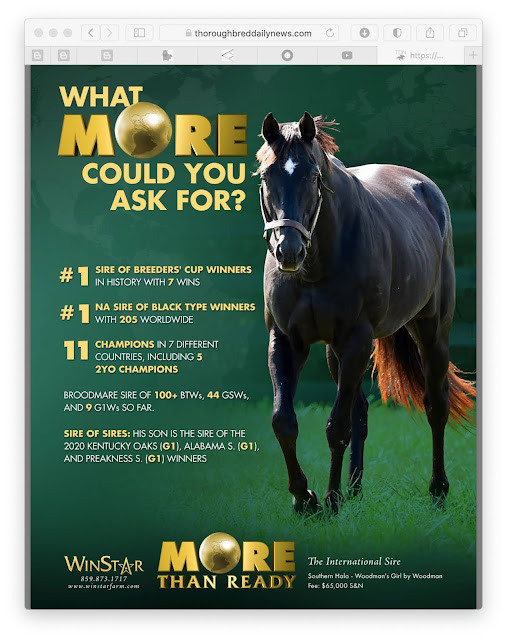 TDN Rising Star' Caracaro (Uncle Mo--Peace Time, by War Front) has been retired from racing and will take up stud duties in 2021 at Pope McLean's Crestwood Farm for a fee of $6,500 LFSN. Campaigned by Global Thoroughbred and Top Racing LLC and conditioned by Gustavo Delgado, the bay was a six-length second-out winner at Gulfstream in January. He was second by a neck in Saratoga's GIII Peter Pan S. in July, and completed the exacta in the GI Runhappy Travers S. Aug. 8 while earning a 101 Beyer Speed Figure.

Santa Anita Park announced Saturday that overnight purses for its 2020-21 season, which begins in its traditional Dec. 26 card, will be raised by 10% to a daily average of $533,000. The meet will run through June 20, 2021. Six stakes on opening day include the GI Malibu S., GI La Brea S. and GI American Oaks. Other meet highlights include the GI Santa Anita H. Mar. 6 and GI Santa Anita Derby Apr. 3. Click for a complete stakes schedule, pending approval by the Thoroughbred Owners of California. 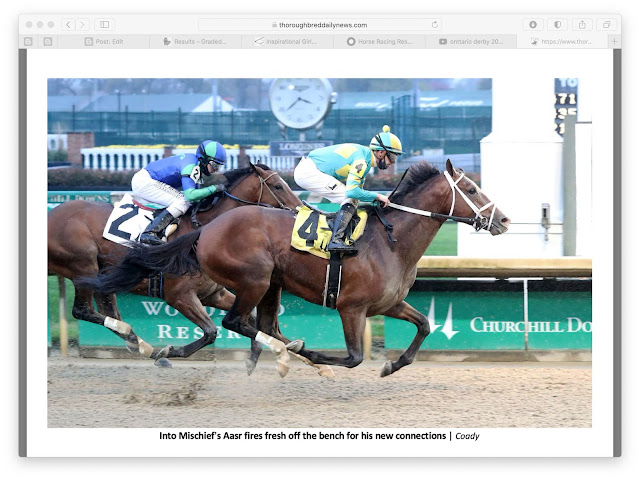