THIS SIDE UP: YOUNG GUNS SEEK JUVENILE MOMENTUM

You can't really resent someone hoarding the ammunition, if he only needs it because he's being forced to play Russian roulette. That's pretty much how things are for all those new, unproven stallions who corral such huge books of mares. Yes, I remain ever aggrieved on behalf of those quiet achievers who never get commercial traction, despite results that will almost invariably prove beyond their emerging rivals. But I do feel increasing sympathy for the young guns, because their margin for error is zero. They have to land running, or they can pack their bags. Only rarely can a horse persuade the market to repent, like Daredevil. His export to Turkey last year, certainly, was a good deal more typical than his recent repatriation. After entertaining 376 mares across three seasons, he had found himself reduced to 21 as breeders moved on to the next parade of clean-cut cadets.

Such is the ruthlessly narrow window of opportunity. While allowances may be made for the two-turn type--whose clientele tend to be in less of a hurry and may even, glory be, include end-users--any of us can already look down the current freshmen's table and speculate which may be first to Louisiana, and which to Korea. Cont. p3 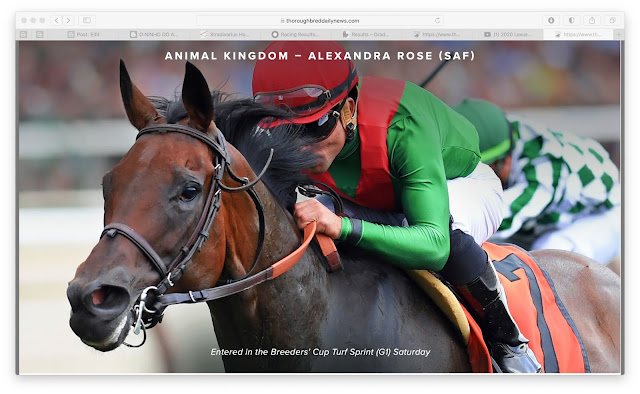 Bred by Ray Hanson, Blended Citizen is out of the multiple stakes-winning Langfuhr mare Langara Lass. The $85,000 OBS March graduate is a half-brother to the stakes-winning millionaire Lookin At Lee (Lookin At Lucky), runner-up in the 2017 GI Kentucky Derby.

Blended Citizen's resume includes wins in the 2018 GIII Peter Pan S. and GIII Jeff Ruby Steaks and also a win in this year's GIII Louisiana S. via disqualification. He retires with a record of 22-5-1-2 and earnings of $558,230.

A stud deal is pending for Blended Citizen. He's catalogued as a stallion prospect in the upcoming Keeneland November auction with South Point Sales.

Pegasus World Cup Day will feature a total of seven stakes, all graded, worth $4.8 million.

LOOKIN AT LEE TO STAND IN NEW YORK

Lookin At Lee (Lookin At Lucky--Langara Lass, by Langfuhr), a

two-time stakes winner and runner-up in the 2017 GI Kentucky Derby, has been retired from racing and will stand his first season at stud in 2021 under the management of Irish Hill & Dutchess Views Stallions LLC in Saratoga, New York. Lookin At Lee will stand his initial season for $6,500 LFSN.

The $70,000 KEESEP yearling graduate, owned by L and N Racing LLC and trained by Hall of Famer Steve Asmussen, posted a record of 35-4-6-4 and career earnings of $1,343,188. His resume also includes a runner-up finish in the GI Claiborne Breeders' Futurity and a third-place finish in the GI Arkansas Derby. He was bred in Kentucky by Ray Hanson. 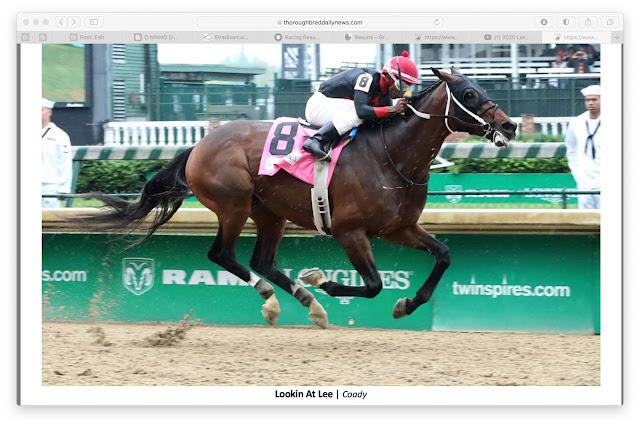