VEKOMA SCRATCHED FROM BC SPRINT AFTER SPIKING FEVER.

Dual 2020 Grade I winner Vekoma (Candy Ride {Arg}), the heavy favorite for Saturday's GI Breeders' Cup Sprint, has been scratched from the race after spiking a fever, it was announced early Wednesday morning by trainer George Weaver.

In a statement circulated to the media Wednesday morning, Bob Baffert pledged to do everything possible to ensure that he receives no further medication positives, saying that he wanted to be a positive influence on horse racing.

Baffert, who has seen medication positives over overages three times in the last six months, outlined several steps his barn was taking.

Live Oak Plantation homebred Win Win Win (Hat Trick {Jpn}--Miss Smarty Pants, by Smarty Jones), who capped his career with a head-turning last-to-first victory in Saratoga's GI Forego S. Aug. 29, will take up stud duties next year at Ocala Stud for a fee of $5,000 LFSN. He will stand as property of a partnership between Live Oak, Ocala Stud and Airdrie Stud.

Matthew Schera's stakes-winning and MGSP 7-year-old Vorticity (Distorted Humor--Tar Heel Mom, by Flatter) has been retired. A $220,000 Fasig-Tipton Midlantic juvenile purchase in 2015, and later that year annexed the Marylander S. before seconds in the GIII Jerome S. and GIII Withers S. as an early season 3-year-old. 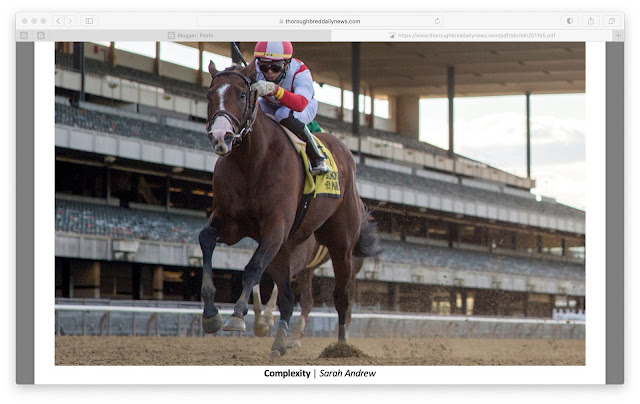