In March and April, the bloodstock sales world stood on the precipice, or so it seemed, as the Inglis Easter Yearling Sale--the first major international auction to confront the social upheaval of COVID-19--was put under severe pressure. In the event, team Inglis rose to the challenge and showed a potential way forward for other sales houses with its innovative virtual sale. It didn't, however, escape completely unscathed, and trepidation remained high for those with horses to sell all over the Northern Hemisphere.

Six months on, we can now report that the sales went ahead-- not all in their chosen venues and dates and not all with their original lineups--but horses were sold nonetheless, cash flowed so that bills will get paid and future investment funds will be found.

Remarkably, Europe~s five big yearling auctions--Arqana, Doncaster Premier, Goffs Orby and Tatts Books 1 and 2--ended up with an average price just over 14% behind where it was 12 months ago. In essence, prices in 2020 are still ahead of where they were as recently as 2015. It's a truly miraculous turn of events considering what we thought we faced six months ago.

It wasn't good news for everyone, though. Confidence didn't really return until Tattersalls staged their annual yearling sale during the first two full weeks in October. Cont. p2 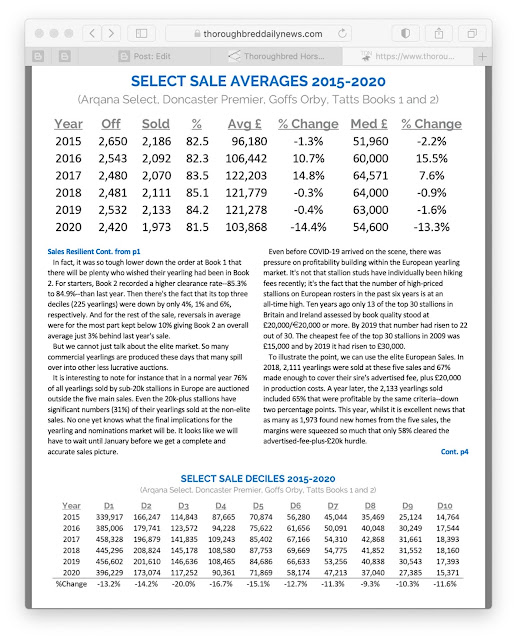 KING OF CHANGE RETIRED TO DERRINSTOWN

Group 1-winning miler King Of Change (GB) (Farhh {GB}BSalacia {Ire}, by Echo of Light {GB}) has been retired from racing and will stand in 2021 at Derrinstown Stud for a fee of i7,000.

Bred by Rabbah Bloodstock and campaigned by owner Ali Abdulla Saeed with trainer Richard Hannon, King Of Change was placed in each of his two starts at two before breaking his maiden on seasonal debut in April of his 3-year-old campaign. He outran odds of 66-1 to finish second to Magna Grecia (Ire) (Invincible Spirit {Ire}) in last year~s G1 2000 Guineas, and justified that form by winning his two subsequent starts: the Listed Fortune S. at Sandown and the G1 Queen Elizabeth II S. on Champions Day at Ascot last year with the likes of Magna Grecia, Benbatl (GB), Phoenix Of Spain (Ire), Mohaather (GB), Veracious (GB), Lord Glitters (Fr) and Accidental Agent (GB) in his wake. King Of Change has not raced since. Cont. p5

German Champion Sire elect Adlerflug (Ger) (In the Wings {GB}) will stand for €16,000 in 2021, Deutscher Galopp reported on Wednesday. This marks an increase from €10,000 for the Gestut Schlenderhan resident. In 2020, the chestnut sired three black-type winners so far, among them G1 German Derby hero In Swoop (Ire) and G1 Grosser Preis von Berlin victor Torquator Tasso (Ger). The 16-year-old has sired 10 black-type horses in 2020 and 15 stakes winners overall.

Dual Australian Group 1 winner Con Te Partiro (USA) (Scat Daddy {USA}) is destined for a date with an elite European-based stallion after she was purchased by David Redvers on behalf of Sheikh Fahad for US$1.6 million (AU$2.2 million).

Con Te Partiro, who won both this year's G1 Coolmore Classic and G1 Coolmore Legacy for Gai Waterhouse and Adrian Bott, was initially passed in when offered via Bedouin Bloodstock through the Keeneland November Breeding Stock Sale as Hip 217 on Monday, but a deal was subsequently done between her previous owners and Sheikh Fahad's bloodstock manager Redvers. 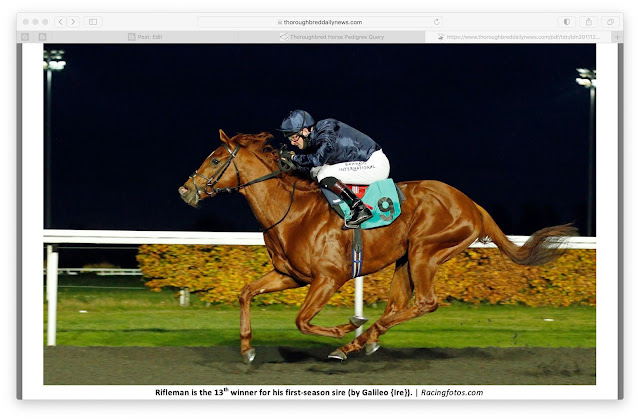