IN ITS BEST FILLIES, RACING DOES HAVE LASTING STARS

The announcement last week that GI Kentucky Derby and
GI Breeders' Cup winner and likely Horse of the Year Authentic (Into Mischief) had been retired was disappointing, but very much expected. It would have been nice to see him run another year, but it was never going to happen. From the business side of the sport, there was no other call, not when you have a son of super sire Into Mischief who will stand for $75,000 and likely go to 200-plus mares.

Unless there is a seismic shift in the economics of racing and breeding, the elite male horses will continue to have short careers, many of them not racing after their 3-year-old years. It wasn't just Authentic. The Classic was the last start for Improbable (City Zip), Maximum Security (New Year's Day) and Tom's d'Etat (Smart Strike). Global Campaign (Curlin) is also headed to stud, but may first start in the GI Pegasus World Cup at Gulfstream Park. Among the top five choices in the Classic betting, only Tiz the Law (Constitution) is scheduled to run next year.

But that doesn't mean that the sport can't cultivate stars. It just needs to look elsewhere.

While marquee males can't be retired fast enough, the opposite trend is now taking place with the elite fillies and mares. We are seeing them come back at four, five, even six. Again, it's a matter of economics. Cont. 3

RED FLAG WARNING AT DEL MAR
Tina and Jerry Moss's Red Flag became the stakes winner for his freshman sire, 2016 GI Breeders' Cup Dirt Mile victor Tamarkuz (Speighstown), with a romping 7 1/4-length score in the GIII Bob Hope S. at Del Mar Sunday. Sent off at 10-1, the chestnut colt was widest of four scrambling on the front end early, with Weston (Hit it a Bomb) down along the rail and favored Spielberg (Union Rags) and Coastal Kid (Coast Guard) all to his inside. Weston took a slim advantage after a quarter in :22.37, but the race changed in an instant when Coastal Kid, caught in tight quarters between the tiring Spielberg and the rallying Red Flag, took up sharply near the three-eighths pole. Red Flag surged to the lead with authority after a half in :45.34 and extended his advantage with every stride down the lane. Uncle Boogie (Ride On Curlin) rallied for second over Ambivalent (Constitution). Spielberg settled for fourth. After an inquiry into the incident on the turn, the stewards made no change to the order of finish. Cont. p5 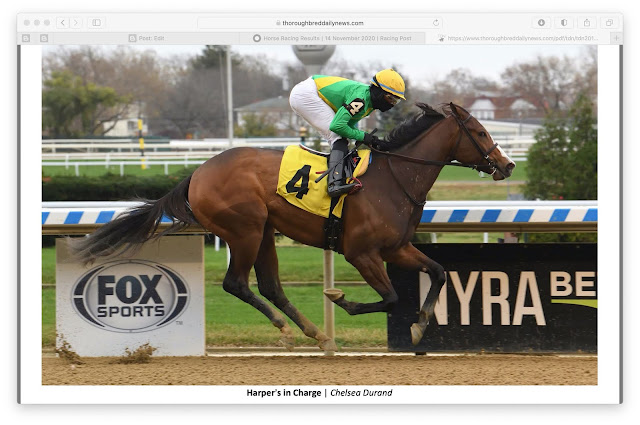