BUMPER BOOKS FOR BUSIEST STALLIONS OF 2020

The coronavirus pandemic may have come into full force halfway through the 2020 covering season but, generally, breeders appear to have stuck to their plans and carried on with their matings. The total number of coverings did drop slightly to 19,961 (from 20,819) with 19% of the mares in production being sent to a stallion with a book in excess of 200.

This year, according to the recently published Return Of Mares from Weatherbys, there were 17 stallions in Britain and Ireland in that bracket, 12 of which are standing at National Hunt studs. Of the Flat stallions, Coolmore's dual Guineas winner Churchill (Ire) was kept busiest, with 250 mares on his list, and he was one of three sons of Galileo (Ire) in the top 20 on book sizes, along with Frankel (GB) on 175 and Gleneagles (Ire) on 173.

One freshman sire, Tally-Ho Stud's Inns Of Court (Ire), commanded more than 200 mares, and was second overall with 218. His fellow first-season sires Blue Point (Ire), Magna Grecia (Ire), Calyx (GB) and Soldier's Call (GB) all made the top 20, with the latter all but matching his sire Showcasing (GB) for popularity.

Building on his success as the champion first-season sire of 2019 was Night Of Thunder (Ire), who led the Darley stallions with 213 mares. Cont. p2 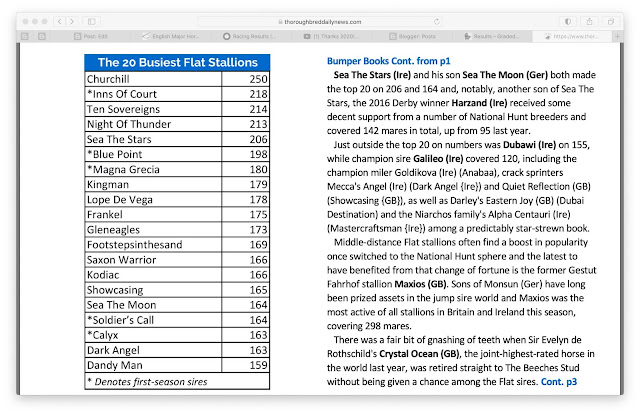 Almond Eye (Jpn) (Lord Kanaloa {Jpn}) ephasised her status as one of the greats of the Japanese turf with a half-length score in the G1 Tenno Sho (Autumn) at Tokyo on Sunday. The first back- to-back winner since Symboli Kris S (Kris S.) in 2002/03, the bay mare is the sixth horse to salute in seven Japanese Group 1s and the first Japanese horse to win eight Group 1 races worldwide on turf. Two-time G1 Tenno Sho (Spring) victor Fierement (Jpn) (Deep Impact {Jpn}) was second, with the G1 Takarazuka Kinen winner Chrono Genesis (Jpn) (Bago {Fr}) third by a neck.