Featuring five deep, competitive fields and plenty of intrigue, Future Stars Friday will get the two-day, 37th Breeders' Cup World Championships festivities underway from historic Keeneland Race Course. First post on the all-stakes card at the bucolic oval, hosting the Breeders' Cup for the second time, is 11:30 a.m. ET, with the first Breeders' Cup race set to run at 2:30 p.m. All in all, 184 horses were entered in the 14 World Championship races, which conclude with the highly-anticipated GI Longines Breeders' Cup Classic, slated for 5:18 p.m. Saturday.

Perfect weather is expected for both days, with sunny skies and temperatures in the low 70s.

Speed will take center stage first in the 5 1/2-furlong GII Juvenile Turf Sprint, which was shaken up when expected heavy favorite Golden Pal (Uncle Mo) drew the 14-hole in a race that features three European shippers and nine stakes winners.

Euro participation picks up significantly in the GI Juvenile Turf, with half of the 14 entrants making their respective first starts in North America. The one-mile test is one of the most wide open races of the two days, as evidenced by the chilly 5-1 morning- line quote on favored Mutasaabeq (Into Mischief). Aidan O'Brien-trained player Battleground (War Front) is the first foal out of Found (Ire) (Galileo {Ire}), winner of the 2015 GI Breeders' Cup Turf at Keeneland.

ONE MASTER SCRATCHED FROM THE MILE

The bloodstock industry in Kentucky is heavily weighted to the commercial marketplace, and when the first yearlings of a stallion sell well, sometimes even experienced commercial breeders can get momentarily caught up in the euphoria. A breeder called me after the Fasig-Tipton October Sale to say that he was going to breed to such a stallion next year. That's great, I told him, if he had a strong opinion on the horse, but I reminded him that he breeds to sell and he'd be breeding to a fourth-year sire, meaning that when he sold the resulting fourth-crop yearling, the stallion would have 4-year-olds racing. That sobered him up quickly after he digested the years, because he knew that if the sire wasn't successful by then, his yearling would get hammered in the ring. 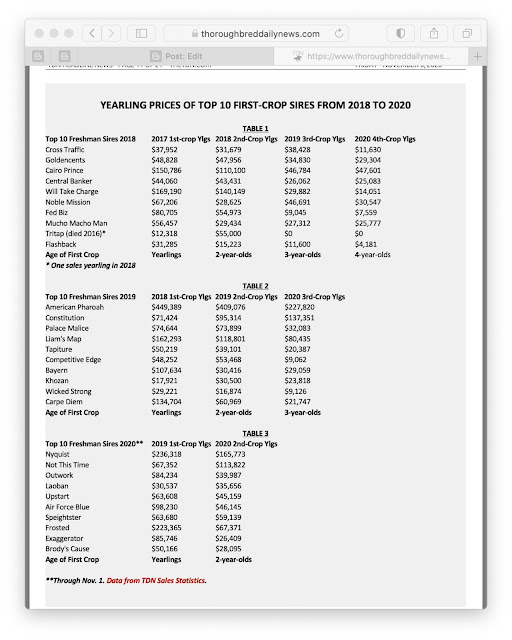 Sagamore Racing, the Maryland-based breeding and racing operation founded 14 years ago by Under Armour chief executive Kevin Plank, is getting out of the sport. Its horses have been in the gradual process of being sold off, and the historic 530-acre Sagamore Farm in Glyndon will transition into supplying rye, corn and limestone-filtered spring water to support a Plank-backed whiskey distillery.

Sagamore led all breeders of Maryland-breds by earnings in 2019, and at its peak during Plank's tenure the farm housed 100 horses. The news comes 10 years to the date that Sagamore Racing color bearer Shared Account upset the GI Breeders' Cup Filly and Mare Turf at 46-1, which marked the first elite-level win for the stable.

The Baltimore Sun and WBAL radio both broke the story around the same time on the morning of Nov. 5.

Plank told the Sun that his decision to exit the Thoroughbred business is not related to Under Armour's woes in the athletic apparel sector. Shares in the company's stock have plummeted nearly 70% in value over the last five years. In a Nov. 3 article, the financial news outlet Motley Fool attributed the decline to "executive shake-ups, brand missteps, and an extremely difficult competitive environment."